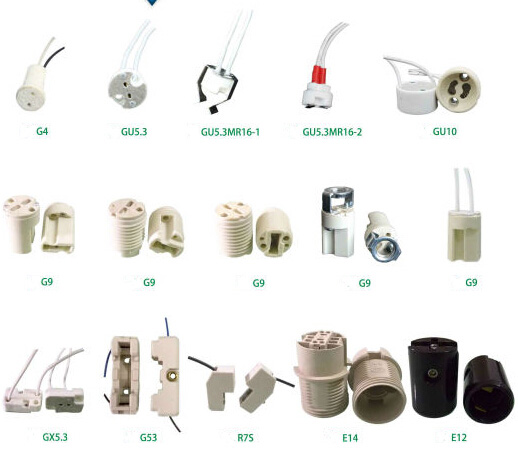 A lamp socket, also known as the Edison screw fitting, is a threaded screw base used to hold and connect a light bulb to a power source. Invented by Thomas Edison and marketed in 1909, these sockets typically have right-hand threads, which allow the light bulb to be screwed in clockwise and removed counterclockwise. To deter theft in public places, the threads are sometimes reversed to prevent installation in common light fixtures.

The way to Replace light socket as below:

Remove the screws or post connecting the socket. There are typically two or three screws holding the fixture itself to the bracket. Lower the fixture down, exposing the wire connections. Once the fixture is down, use your hands or pliers to undo the wire nuts.

Connect the wires to the new fixture. The wires should be reattached in the same places as the old fixture, usually white to white, black to black, and ground (bare copper) to the metal junction box. Neutral wire-usually white-should be attached to neutral wire. Twist the wires two or three times together clockwise, or the same direction you turn the wire nuts.

You can use either the old wire nuts or the new ones provided with the fixture. To use the wire nut, place the stripped ends of each wire next to each other, with their points facing the same direction. Then place the wire nut over the ends and twist clockwise until the wires are secured inside the wire nut.

Use pliers to twist the ends of the wires together before trying to screw the wire nut on. This is especially helpful for houses with smaller gauge (thicker) wires.

Don’t be intimidated. With the electricity off, the wires are harmless, and everything is color coded (black and white, or, outside the US, brown and black.).

Most standing lamps consist of a body, a base where the cord enters, a harp to support the shade, and a socket, which receives the cord at one end and the lightbulb at the other. The cord usually runs through a hollow threaded rod from the base to the socket.

When a lamp won’t work and you know the bulb is OK, check the cord for damage. If the insulation is worn and cracked, replace the entire cord (see Rewiring Lamps, Related Projects). If the cord is OK, the problem is most likely in the socket.

Most lamps have felt bases that must be removed before repairing the lamps. Remove the felt by paring it off with a utility knife. After the repair, reapply the felt with white glue.